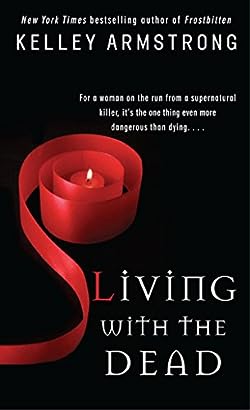 Book 9 in the Women of the Otherworld series
published 2008

Robyn Peltier moved to Los Angeles after her young husband’s sudden death, trying to put some distance between herself and her memories. Though she’s still grieving, the challenges of her new life as the PR consultant to Portia Kane—the world’s most famous celebutante wannabe—can sometimes be amusing, even distracting. But when her client is gunned down in the back room of a nightclub, Robyn is suddenly on the run as the prime suspect in the murder. And as more bodies pile up around her, it seems like only Hope Adams, Robyn’s best friend, and Hope’s somewhat spooky boyfriend Karl are on Robyn’s side.

Hope Adams follows the kinds of stories whose headlines scream from supermarket checkout lines. But the difference is that Hope’s stories are even weirder—and they’re all true. Though determined to help Robyn, Hope knows it’s only a matter of time before her friend is caught. But it’s not the police Hope is worried about. For Robyn has gotten herself in the middle of a turf war between two powerful Otherworld cabals who’ll spill any amount of blood—human and inhuman—to protect what they consider theirs for all eternity. And the only way Hope can keep her friend alive is by letting her enter a world she’s safer knowing nothing about.