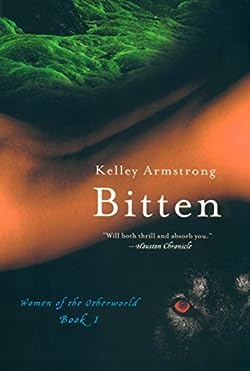 Book 1 in the Women of the Otherworld series
published 2001

Elena Michaels seems like the typically strong and sexy modern woman, She lives with her architect boyfriend, writes for a popular newspaper, and works out at the gym. She’s also the world’s only female werewolf. And she’s tired of it. Tired of a life spent hiding and protecting, a life where her most important job is hunting down rogue werewolves. Tired of a world that not only accepts the worst in her–her temper, her violence–but requires it. Worst of all, she realizes she’s growing content with that life, with being that person.

Elena has done all she can to assimilate to the human world, but the man whose bite changed her existence forever, and his legacy, continue to haunt her. So she left the Pack and returned to Toronto where she’s trying to live as a human. When the Pack leader calls asking for her help fighting a sudden uprising, she only agrees because she owes him. Once this is over, she’ll be squared with the Pack and free to live life as a human. Which is what she wants. Really.

Thrown into a desperate war for survival that tests her allegiance to a secret clan of werewolves, Elena must recon with who, and what, she is in this passionate, page-turning novel that begins the Women of the Otherworld series.