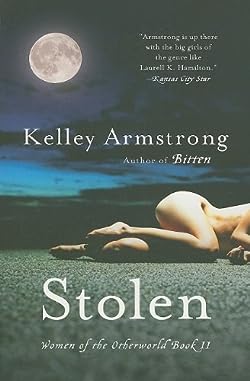 Book 2 in the Women of the Otherworld series
published 2002

It was in Bitten, Kelley Armstrong’s debut novel, that thirty-year-old Elena Michaels came to terms with her feral appetites and claimed the proud identity of a beautiful, successful woman and the only living female werewolf. In Book 2 of the Women of the Otherworld series, Elena Michaels is back-and she has company.

In Stolen, on a mission for her own elite pack, she is lured into the net of ruthless Internet billionaire Tyrone Winsloe, who has funded a bogus scientific investigation of the “other races” and their supernatural powers. Kidnapped and studied in his underground lab deep in the Maine woods, these paranormals – witches, vampires, shamans, werewolves – are then released and hunted to the death in a real-world video game. But when Winsloe captures Elena, he finally meets his match.

For Elena, kidnapped and imprisoned deep underground, unable to tell her friends from her enemies, choosing the right allies is a matter of life and death.

When a young witch tells Elena that a group of humans are kidnapping supernaturals, Elena ignores the warning. After all, everyone knows there’s no such thing as witches. As for the thought of other ‘supernaturals’, well, she’d just rather not dwell on the possibility. Soon, however, she’s confronted with the truth about her world, when she’s kidnapped and thrown into a cell-block with witches, sorcerers, half-demons and other werewolves. As Elena soon discovers, dealing with her fellow captives is the least of her worries. In this prison, the real monsters carry the keys