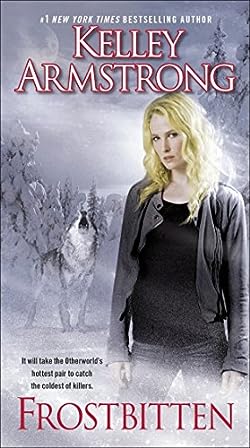 Book 10 in the Women of the Otherworld series
published 2009

Smart, sexy, supernatural—the men and women of the Otherworld live and love, fight and die, among us. Unseen and unsuspected, this realm of witches, ghosts, and werewolves is now threatened with exposure by a brutal series of bizarre murders that has left even the supernatural world baffled—and cold with terror….

Being the world’s only female werewolf has its advantages, such as having her pick of the Otherworld’s most desirable males. And Elena Michaels couldn’t have picked a more dangerously sexy and undyingly loyal mate than Clayton Danvers. Now their bond will be put to the ultimate test as they follow a bloody trail of gruesome slayings deep into Alaska’s frozen wilderness.

There’s nothing the werewolf community dislikes more than calling attention to itself. So when a pair of rogue man-eaters begins hunting humans, it’s up to Elena and Clayton to track down the predators. But any illusions their task would be simple are quickly dispelled. For even in werewolf terms, there’s something very disturbing taking place in the dark Alaskan forests. A werewolf more wolf than human and more unnatural than supernatural is on the hunt—a creature whose origins seem to spring from ancient legends of the shape-shifting Wendigo.

And if that wasn’t bad enough, Clayton and Elena find themselves confronting painful ghosts from their pasts — and an issue neither of them is eager to discuss. For one of them has been chosen to become the new Pack leader, and as every wolf knows, there can be only one Alpha. They’ve always been equals in everything. Now, when their survival depends more than ever on perfect teamwork, will instinct allow one of them to lead…and the other to follow?