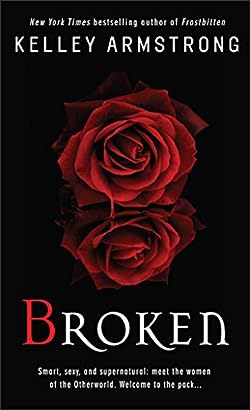 Book 6 in the Women of the Otherworld series
published 2006

In this thrilling new novel from the author of Industrial Magic, a pregnant werewolf may have unwittingly unleashed Jack the Ripper on the twenty-first century — and become his next target…

Ever since she discovered she’s pregnant, Elena Michaels has been on edge. After all, she’s never heard of another living female werewolf, let alone one who’s given birth. But thankfully, her expertise is needed to retrieve a stolen letter allegedly written by Jack the Ripper. As a distraction, the job seems simple enough — only the letter contains a portal to Victorian London’s underworld, which Elena inadvertently triggers — unleashing a vicious killer and a pair of zombie thugs.

When half-demon Xavier calls in the favor Elena owes him, it seems easy enough, steal Jack the Ripper’s ‘From Hell’ letter away from a Toronto collector who had himself stolen it from the Ripper evidence boxes. But nothing in the supernatural world is ever as simple as it seems. Elena accidentally triggers a spell placed on the letter, and opens a dimensional portal into Victorian London, releasing zombies, disease, and maybe a notorious serial killer himself.Now Elena must find a way to seal the portal before the unwelcome visitors get what they’re looking for — which, for some unknown reason, is Elena…

We get plenty of Elena, Clay, Jeremy, Jaime, and the setting of Toronto with an unusual historical mystery involving magic.