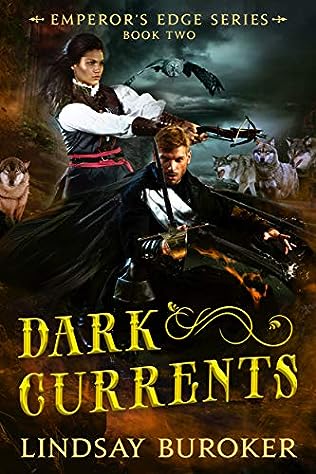 It’s been three months since former enforcer Amaranthe Lokdon and the notorious assassin Sicarius thwarted kidnappers and saved the emperor’s life. The problem? Nobody knows they were responsible for this good deed. Worse, they’re being blamed for the entire scheme. With enforcers and bounty hunters stalking them, and the emperor nursing a personal hatred for Sicarius, it’s going to be hard to earn exoneration.

When Amaranthe’s team discovers mutilated bodies in the city aqueducts and a mysterious illness incapacitates thousands of citizens, she and Sicarius see an opportunity to solve the mystery and prove their loyalty. But they’ll have to defeat vengeful shamans, man-eating predators, and deadly mechanical constructs, all while dodging imperial soldiers who would rather kill them than accept their help.

Nobody said exoneration would be easy.

Amaranthe is back as the main point-of-view character, but this time shares the spotlight with her erstwhile companion Books, the group’s researcher and often lecturer.