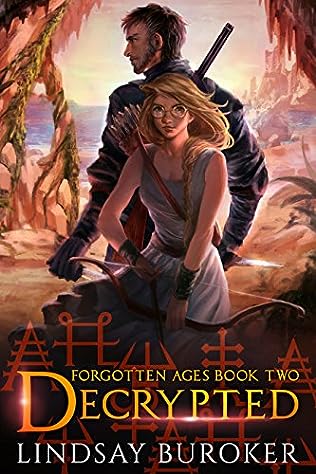 Professor Tikaya Komitopis knew that bringing Admiral Rias Starcrest home to meet her family wouldn’t be easy, not when he led the fleet that decimated her nation during the war. She isn’t surprised when people believe she’s been brainwashed, that Rias is still loyal to the empire, and that he has nefarious plans for her homeland.

She is, however, surprised when Rias’s designs to build a submarine lead them to stumble across an ancient secret shrouded in mystery, time, and lies.

If revealed, this secret could mean devastation for Tikaya’s entire nation. It could also mean choosing between her people… and the man she loves. Tikaya has brought Rias home to the Kyatt Islands to meet her family. This time they have to struggle against the Kyattese authority’s and Tikaya’s family’s prejudices against Rias

Decrypted is the sequel to Encrypted and is loosely tied in with the author’s “Emperor’s Edge” series.