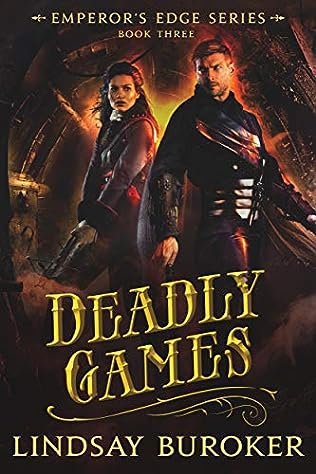 When you’ve been accused of kidnapping an emperor, and every enforcer in the city wants your head, it’s hard to prove yourself an honorable person and even harder to earn an imperial pardon.

That doesn’t keep Amaranthe Lokdon and her team of outlaws from trying. When athletes start disappearing from the Imperial Games, they may finally have an opportunity to show the emperor that they’re on his side. If she and her comrades can get to the bottom of such a public mystery, they’re sure to get the credit.

But plans go awry when Amaranthe’s own men start plotting against each other, the new ally she’d hoped to acquire tries to turn her in, and her best fighter—and closest friend—disappears.

Maybe getting involved wasn’t such a good idea after all…

Deadly Games is approximately 110,000 words. It is the third book in The Emperor’s Edge series. The first book is told from Amaranth’s POV.