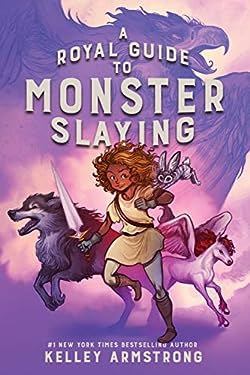 Monster hunting isn’t for the faint of heart—the first in a brand-new middle-grade series by NYT bestselling author, Kelley Armstrong.

Rowan and her twin Rhydd are bound by societal rules and expectations, to their dismay, but soon they learn about being careful about what you wish for.

Twelve-year-old Rowan is next in line to be Queen; her twin brother, Rhydd, to be Royal Monster Hunter. Rowan would give anything to switch places, but the rule is, the oldest child is next in line, even if she is only older by two minutes. She resigns herself to admiring her royal monster hunter aunt’s official sword and having tea with dignitaries with her mother, the queen. But a tragic event breaks up longstanding rules, and now Rowan finds herself in hunt of a dangerous gryphon.

Accompanied by a feisty and determined baby jackalope and a giant wolf that barely tolerates her, she sets off on a journey that will see her join forces with other unlikely allies: a boy who has ambitions of his own to hunt monsters, and a girl from a nearby clan with hidden motives for befriending Rowan. It will take all of Rowan’s skills, both physical and diplomatic, to keep this journey on track. The future of the kingdom depends on it.