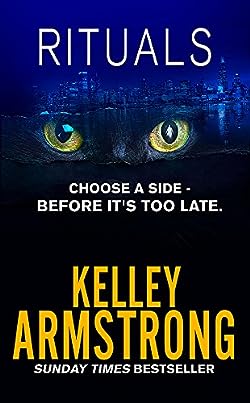 Book 5 in the Cainsville series
published 2016

The fifth book and the exciting conclusion to bestselling author Kelley Armstrong’s “impossible-to-put-down” Cainsville series, in which she mixes hard-hitting crime writing with phenomenal world-building to create a brand of fiction all her own.

When Olivia Taylor-Jones found out she was not actually the adopted child of a privileged Chicago family but of a notorious pair of convicted serial killers, her life exploded. Running from the fall-out, she found a refuge in the secluded but oddly welcoming town of Cainsville, Illinois, but she couldn’t resist trying to dig out the truth about her birth parents’ crimes. She began working with Gabriel Walsh, a fiendishly successful criminal lawyer who also had links to the town; their investigation soon revealed Celtic mysteries at work in Cainsville, and also entangled Olivia in a tense love triangle with the calculating Gabriel and her charming biker boyfriend, Ricky. Worse, troubling visions revealed to Olivia that the three of them were reenacting an ancient drama pitting the elders of Cainsville against the mysterious Huntsmen with Olivia as the prize.

Olivia Jones must make a choice. Caught between two rival supernatural forces, Liv was granted a brief period in which to make her decision. Now that time has run out. Whichever side she chooses, someone she loves will pay. Her lover, Ricky. Gabriel Walsh, the man she knows she cannot, must not love. Her parents, already trapped in prison.

And now there is a new, terrifying power rising – one that doesn’t distinguish between good and evil intentions. It feeds on chaos and destroys without mercy. Unless Liv acts fast, no one will survive. In this gripping thriller, international bestselling author Kelley Armstrong brings the Cainsville series to a powerful, richly rewarding climax.

In the series’ fifth and final novel, not only does Gabriel’s drug addict mother, who he thought was dead, make a surprise reappearance, but Kelley Armstrong delivers a final scary and surprising knock-out twist. It turns out a third supernatural force has been at work all along, a dark and malevolent entity that has had its eye on Olivia since she was a baby and wants to win at any cost.