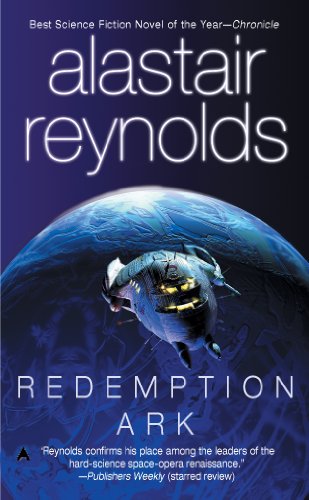 50 years ago, human intervention triggered an ancient alien system designed to warn of the emergence of intelligence in this sector of the galaxy. For aeons the Inhabitors have waited. Now the response is on its way.

Late in the twenty-sixth century, the human race has advanced enough to accidentally trigger the Inhibitors – alien killing machines designed to detect intelligent life and destroy it. The only hope for humanity lies in the recovery of a secret cache of doomsday weapons -and a renegade named Clavain who is determined to find them. But other factions want the weapons for their own purposes – and the weapons themselves have another agenda altogether…

Many, many millennia ago, the Inhibitors seeded the universe with machines designed to detect intelligent life – and then to suppress it. But after hundreds of millions of years, the machines started to fail and intelligent cultures started to emerge.

Then Dr Dan Sylveste and the crew of Infinity discovered what had happened to the long-vanished Amarantin race … and awakened the Inhibitors.

On Yellowstone, where no one is quite who they appear, the Inquisitor and the planet’s Most Wanted War Criminal are watching as the Inhibitors turn a small group of planets into raw materials. Whatever they are building with those materials is not going to be good for Humanity.

Once again, Al Reynolds has produced a stunning, universe-spanning space opera of mind-blowing proportions. Big in size, big in concepts, REDEMPTION ARK will leave you gasping at its audacity and breathless at its conclusion.