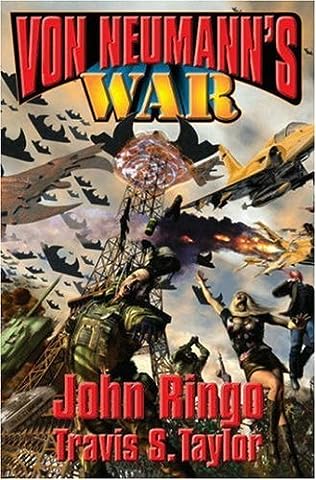 New series. Mars is changing. Somebody was testing a planet-killing weapon on Mars—
and the next target was Earth

Seemingly overnight the once “Red” planet is turning to gray. Something is happening, something unnatural. A team of, literally, rocket scientists figure out a way to send a probe, very fast, to Mars to determine how and why it is changing.

However, when the probe is destroyed well short of the formerly red planet, it’s apparent that Mars is being used as a staging ground. The only viable target for that staging ground is Earth. Ranging from rocket design to brilliant paranoids to “in your face” fighting in Iraq, Von Neumann Wars is a fast-paced look at what would happen if the earth was attacked by a robot race that, quite accidentally, was bent on destroying civilization.

Mars is the staging ground. Earth is the target. A storm of invasion gathers as the Red Planet pales and Earth scientists – amateurs and professionals alike – race to discover what it portends. Worse news: the horde of self-replicating probes suspected as the cause – implacable and all-consuming in its own right – may be only the tip of a full-scale assault.

Ideas — the only useful weapon when facing an adversary an order of magnitude more advanced than you are. But against such an enemy, thought without action is as futile as war-making without a plan. Humanity’s hope? The “straddlers”: intelligent soldiers who know their science — and fighting scientists who have no scruples about using their smarts to kick some alien butt. Yet even with the right people finally on the job, the hour is late.

For Mars glows red again. And the swarm is nearly upon us!