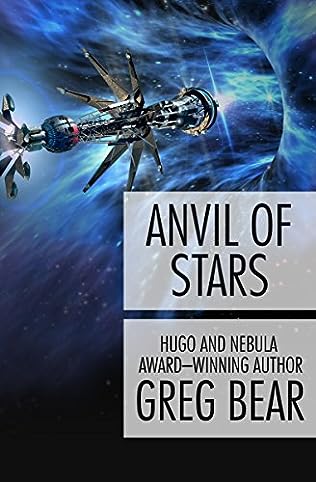 Greg Bear’s The Forge of God described the destruction of Earth itself by self-replicating robots, Von Neumann machines designed to use the planet’s mass to create more robotic creatures and spread throughout the Galaxy.

In Anvil of Stars, a Ship of the Law travels the infinite enormity of space, carrying 82 young people: fighters, strategists, scientists; the Children. They work with sophisticated non-human technologies that need new thinking to comprehend them. They are cut off forever from the people they left behind.

Denied information, they live within a complex system that is both obedient and beyond their control. They are frightened. And they are making war against entities whose technologies are so advanced, so vast, as to dwarf them. Against something whose psychology is ultimately an unknowably alien.

Humanity is given a starship by The Benefactors, and driven only by revenge they set out to find the unknown beings who are responsible for the destruction of Earth, and many other worlds.