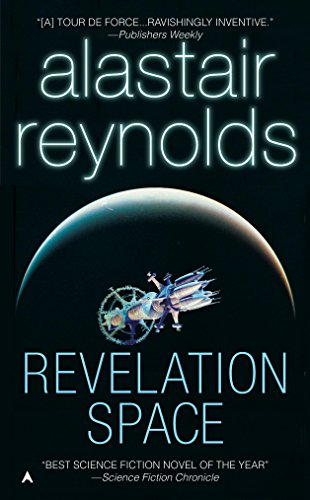 Alastair Reynolds’s critically acclaimed debut has redefined the space opera with a staggering journey across vast gulfs of time and space to confront the very nature of reality itself.

Nine hundred thousand years ago, something annihilated the Amarantin civilization just as it was on the verge of discovering space flight. Now one scientist, Dan Sylveste, will stop at nothing to solve the Amarantin riddle before ancient history repeats itself. With no other resources at his disposal, Sylveste forges a dangerous alliance with the cyborg crew of the starship Nostalgia for Infinity. But as he closes in on the secret, a killer closes in on him. Because the Amarantin were destroyed for a reason — and if that reason is uncovered, the universe—and reality itself — could be irrecoverably altered…

Sylveste is the only man ever to return alive and sane from a Shroud, an enclave in space protected by awesome gravity-warping defenses: “a folding a billion times less severe should have required more energy than was stored in the entire rest-mass of the galaxy.” Now an intuition he doesn’t understand makes him explore the dead world Resurgam, whose birdlike natives long ago tripped some booby trap that made their own sun erupt in a deadly flare.

Meanwhile, the vast, decaying lightship Nostalgia for Infinity is coming for Sylveste, whose dead father (in AI simulation) could perhaps help the Captain, frozen near absolute zero yet still suffering monstrous transformation by nanotech plague. Most of Infinity‘s tiny crew have hidden agendas–Khouri the reluctant contract assassin believes she must kill Sylveste to save humanity–and there are two bodiless stowaways, one no longer human and one never human. Shocking truths emerge from bluff, betrayal, and ingenious lies.

The trail leads to a neutron star where an orbiting alien construct has defenses to challenge the Infinity’s planet-wrecking superweapons.