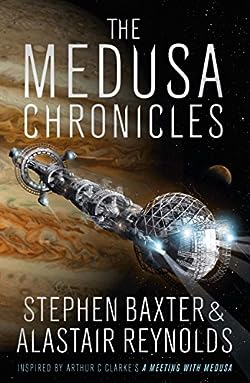 Following an accident that almost cost him his life, Howard Falcon was not so much saved as he was converted, through the use of prosthetics, into something faster, stronger and smarter …but also slightly less human and more machine than he was. And with this change came an opportunity – that of piloting a mission into Jupiter’s atmosphere, and ultimately of making first contact with the life forms he discovers there.

Picking up the threads of humanity versus artificial intelligences and machines, and of encounters with the alien, this collaborative novel between two superb writers is a sequel to Howard Falcon’s adventures. A proper science fiction adventure, this is perfect for fans of Golden Age SF as well as the modern SF reader.

Howard Falcon almost lost his life in an accident as the first human astronaut to explore the atmosphere of Jupiter—and a combination of human ingenuity and technical expertise brought him back. But he is no longer himself. Instead, he has been changed into an augmented human: part man, part machine, and exceptionally capable.

With permission from the Clarke Estate, Stephen Baxter and Alastair Reynolds continue this beloved writer’s enduring vision and have created a fresh story for new readers. The Medusa Chronicles charts Falcon’s journey through the centuries granted by his new body, but always back to mysteries of Jupiter and the changing interaction between humanity and the universe. A compelling read full of incredible action right from the beginning, this is a modern classic in the spirit of 2001 and The Martian