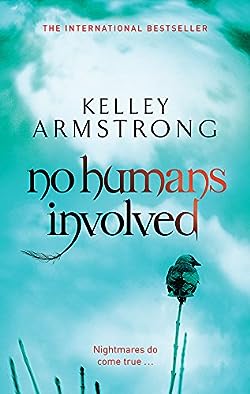 Book 7 in the Women of the Otherworld series
published 2007

In her acclaimed Women of the Otherworld series, bestselling author Kelley Armstrong creates a present-day in which humans unwittingly coexist with werewolves, witches, and other supernatural beings. Now, in this spellbinding new novel, a beautiful necromancer who can see ghosts must come to terms with her power—and with an evil she never thought possible.

It’s the most anticipated reality television event of the season: three spiritualists gathered together in one house to raise the ghost of Marilyn Monroe. For celebrity medium Jaime Vegas, it is to be her swan song—one last publicity blast for a celebrity on the wrong side of forty. But unlike her colleagues, who are more show than substance, Jaime is the real thing.

Reluctant to upstage her fellow spiritualists, Jaime tries to suppress her talents, as she has done her entire life. But there is something lurking in the maze of gardens behind the house: a spirit without a voice. And it won’t let go until somehow Jaime hears its terrible story. For the first time in her life, Jaime Vegas understands what humans mean when they say they are haunted. Distraught, Jaime looks to fellow supernatural Jeremy Danvers for help.

As the touches and whispers from the garden grow more frantic, Jaime and Jeremy embark on an investigation into a Los Angeles underworld of black magic and ritual sacrifice. When events culminate in a psychic showdown, Jaime must use the darkest power she has to defeat a shocking enemy—one whose malicious force comes from the last realm she expected. . . .

In a world whose surface resembles our own, Kelley Armstrong delivers a stunning alternate reality, one where beings of the imagination live, love, and fight a never-ending battle between good and evil.