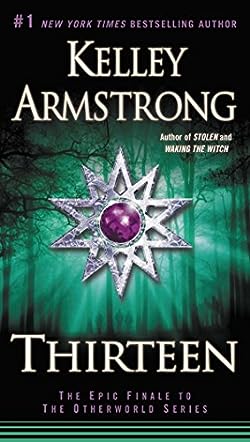 Book 13 in the Women of the Otherworld series
published 2012

The #1 New York Times bestselling author Kelley Armstrong delivers the novel her fans have been clamoring for: Thirteen, the epic finale of the Otherworld series.

War is coming to the Otherworld. A sinister cult known as The Supernatural Liberation Movement is hell-bent on exposing the truth about supernaturals to the rest of the world. Their violent, ruthless plan has put everyone at risk: from werewolves to vampires, from witches to half-demons.

It’s been more than ten years, a dozen installments, and hundreds of thousands of copies since Kelley Armstrong introduced readers to the all-too-real denizens of the Otherworld: witches, werewolves, necromancers, vampires, and half-demons, among others. And it’s all been leading to Thirteen, the final installment, the novel that brings all of these stories to a stunning conclusion.

A war is brewing—the first battle has been waged and Savannah Levine is left standing, albeit battered and bruised. She has rescued her half brother from supernatural medical testing, but he’s fighting to stay alive. The Supernatural Liberation Movement took him hostage, and they have a maniacal plan to expose the supernatural world to the unknowing.

Savannah has called upon her inner energy to summon spells with frightening strength, a strength she never knew she had, as she fights to keep her world from shattering. But it’s more than a matter of supernaturals against one another—both heaven and hell have entered the war; hellhounds, genetically modified werewolves, and all forces of good and evil have joined the fray.

Uniting Savannah with Adam, Paige, Lucas, Jaime, Hope, and other lost-but-notforgotten characters in one epic battle, Thirteen is a grand, crowd-pleasing closer for Armstrong’s legions of fans.