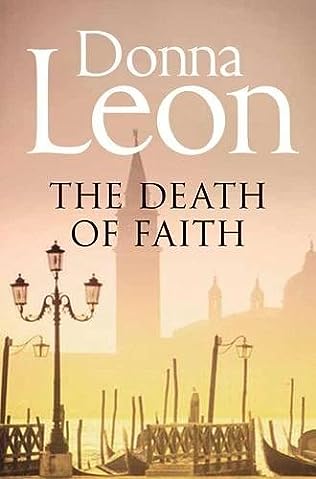 Book 6 in the Commissario Brunetti series (1997)

A nun, Suorimmacolata, leaves her order and the nursing home it runs when she begins to suspect that some of the patients, those who have left their money to the home, are discreetly being murdered. Turning for help to Guido Brunetti, the suave, subtle and worldly-wise comissario of police, she unwittingly leads him into an investigation of both the closed world of the powerful, secretive church organization known as Opus Dei and the very public scandal caused by a local parish priest.

Commissario Guido Brunetti is kicking his heels, pondering the recent lack of crime in Venice, when a beautiful young woman appears at his office door.

Now calling herself Maria Testa, his visitor is more familiar to Brunetti as Suor’lmmacolata, the nun who once cared for his mother at the casa di cura in Dolo. But Maria has recently left her convent after the unexpected deaths of five patients.

Brunetti offers to make some inquiries, but finds now an obvious cause for concern. Is Maria simply creating fears to justify abandoning her vocation?

Or has she stumbled on to a deeply rooted, far more sinister scenario – and put her own life in very grave danger . . . ?