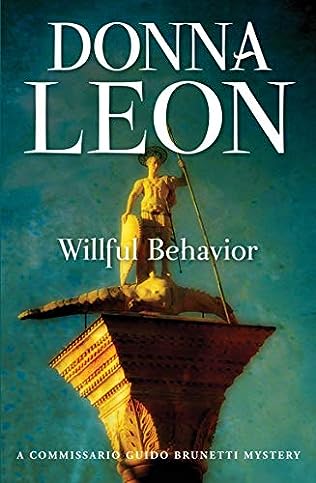 From the acclaimed author of The Waters of Eternal Youth, Commissario Guido Brunetti dredges up dark secrets from Italy’s anti-Semitic past in his captivating eleventh case.

Mystery lovers everywhere are addicted to Donna Leon’s ever-honorable Commissario Guido Brunetti and her portrayal of Venice’s beautiful but sinister byways and canals. In Willful Behavior, Brunetti is approached for a favor by one of his wife’s students. Intelligent and serious , Claudia Leonardo asks for his help in obtaining a pardon for a crime once committed by her now-dead grandfather. Brunetti thinks little of it-until Claudia is found dead. Soon, another corpse and an extraordinary art collection lead Brunetti to long-buried secrets of Nazi collaboration and the exploitation of Italian Jews-secrets few in Italy want to be revealed.

When Commissario Brunetti receives a visit from one of his wife’s students with a strange and vague interest in investigating the possibility of a pardon for a crime committed by her grandfather many years ago, he thinks little of it, despite being intrigued by the girl’s intelligence and moral conscience. But when the girl is found stabbed to death, Claudia Leonardo is no longer Paola’s student, but instead becomes Brunetti’s case.

Claudia seemed to have no discernible living family, but lived with an elderly Austrian woman. Brunetti is stunned by the extraordinary art collection the old woman keeps, and when she in turn is found dead, the case begins to unlock long buried secrets of collaboration during the war, secrets few in Italy are happy to explore…