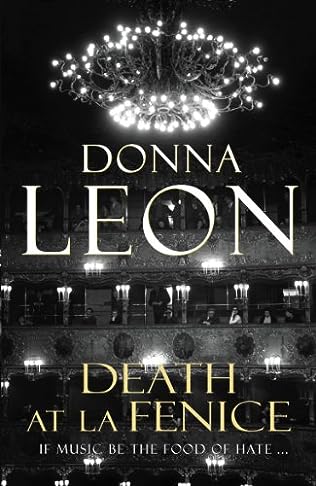 Book 1 in the Commissario Brunetti series (1992)

There is little violent crime in Venice, a serenely beautiful floating city of mystery and magic, history and decay. But the evil that does occasionally rear its head is the jurisdiction of Guido Brunetti, the suave, urbane vice-commissario of police and a genius at detection. Now all of his admirable abilities must come into play in the deadly affair of Maestro Helmut Wellauer, a world-renowned conductor who died painfully from cyanide poisoning during an intermission at La Fenice.

But as the investigation unfolds, a chilling picture slowly begins to take shape–a detailed portrait of revenge painted with vivid strokes of hatred and shocking depravity. And the dilemma for Guido Brunetti will not be finding a murder suspect, but rather narrowing the choices down to one. . .

Death at La Fenice is the first novel in Donna Leon’s internationally best-selling Commissario Guido Brunetti series. During intermission at the famed La Fenice opera house in Venice, a notoriously difficult conductor is poisoned, and suspects abound. Brunetti, a native Venetian, sets out to unravel the mystery behind the high-profile murder. To do so, he calls on his knowledge of Venice, its culture, and its dirty politics. Revenge, corruption, and even Italian cuisine play a role. The novel that started it all, Death at La Fenice is an entrancing mystery, rich in atmosphere.