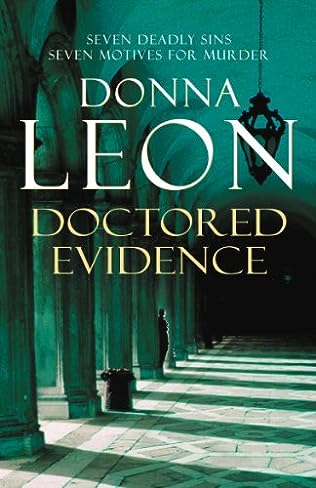 Donna Leon’s riveting new novel, Doctored Evidence, follows Commissario Guido Brunetti down the winding streets of contemporary Venice as he throws open the doors of a case his superiors would rather leave closed. When a miserly spinster is found brutally murdered in her Venice apartment, police immediately suspect her Romanian housekeeper.

They are certain their job is done after the immigrant dies while fleeing arrest, but weeks later; a neighbor comes forward to defend the innocence of the accused. The only investigator who believes the alibi is Brunetti, who will have to go behind the backs of his superiors to vindicate the Romanian and find her employer’s actual killer. As always, the indispensable hacking skills of the ever-loyal Signorina Elettra are the perfect complement to Brunetti’s meticulous detective work. She discovers mysterious deposits in the old woman’s bank account, but who made them?

As Brunetti investigates, his wife, at home, reads him teachings on the Seven Deadly Sins. In a modern world of intrigue and nebulous morality, how do they relate to the murder at hand? Doctored Evidence is charged with suspense and evokes a contemporary Venice with Donna Leon’s masterful flair.