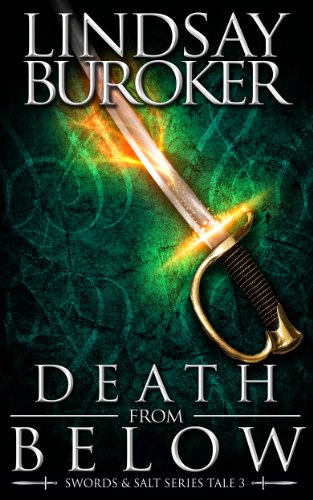 A visit from Yanko’s older brother is interrupted when an alarm blasts through the mine. Mutilated workers have been found dead in a newly opened tunnel.

Yanko has been studying to become a mage, and his brother is a soldier, so they believe they are prepared to deal with this unknown threat, but what awaits them in the subterranean depths is nothing the mine has seen in its hundreds of years of operation.

Yanko’s big brother Falcon comes to visit and strange creatures have killed several miners: action and family dynamics combine into another entertaining story in this third of the Swords & Salt novellas. Death from Below gaves us more on Yanko’s family background with the introduction of his brother, Falcon, and showed us Yanko in his element – applying his passion and talent for the nature sciences/magic to saving those in the salt mines from a gruesome death by mysterious monster attacks.