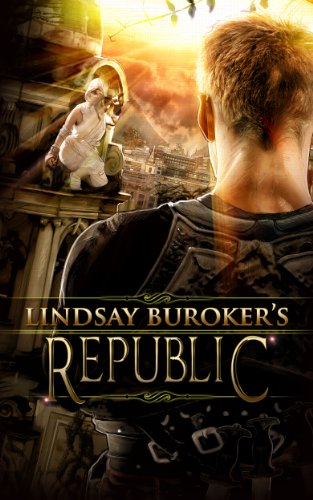 After the notorious outlaws Amaranthe and Sicarius helped overthrow the corrupt faction controlling the empire and brought in a great war hero to lead the nation to prosperity, they finally earned their pardons–and some time off. A tropical vacation cruising around in a private submarine? Perfect.

But their trip is interrupted by a summons from the new president: they’re needed back at home. Trouble unlike anything they’ve ever dealt with threatens to destroy the capital city and throw the fledgling republic into chaos.

Deviating from the style of the other books, this story is told in 6 POVs: Amranthe, Sicarius ( there can never be too many Sicarius POVs), Maldynado,Sespian, Tikaya, and Mahliki.

After the establishment of the republic, it stands to reason that political intrigue drives the conflict in this book. What is unexpected, however, is that the major threat at hand is… an alien plant

The follow-up to The Emperor’s Edge series, Republic takes place a few months after the events of Forged in Blood I & II. It is a complete 210,000-word novel.