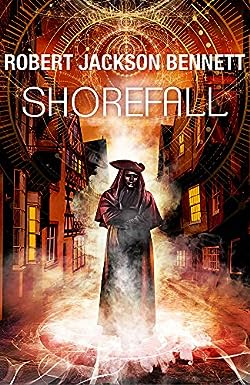 Book 2 in the Founders series
published 2020

The upstart firm Foundryside is struggling to make it. Orso Igancio and his star employee, former thief Sancia Grado, are accomplishing brilliant things with scriving, the magical art of encoding sentience into everyday objects, but it’s not enough. The massive merchant houses of Tevanne won’t tolerate competition, and they’re willing to do anything to crush Foundryside.

Tevanne is a city state in this world which is built on the sea and has numerous canals and mountains. The most remarkable thing here is the magical technology. This is the source of Tevanne’s wealth and the civilization’s advances. And this technology was first discovered by the ancients, the Hierophants, who lived three thousand years ago and wielded powers beyond description. And now something from that past has been awakened from its slumber and it’s coming.

But even the merchant houses of Tevanne might have met their match. An immensely powerful and deadly entity has been resurrected in the shadows of Tevanne, one that’s not interested in wealth or trade routes: a hierophant, one of the ancient practitioners of scriving. And he has a great fascination for Foundryside, and its employees – especially Sancia.

Now Sancia and the rest of Foundryside must race to combat this new menace, which means understanding the origins of scriving itself – before the hierophant burns Tevanne to the ground.