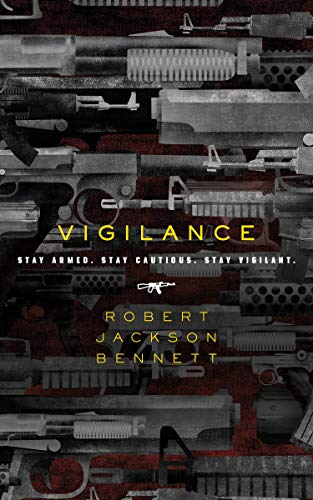 Robert Jackson Bennett’s Vigilance is a dark science fiction action parable from an America that has permanently surrendered to gun violence.

The United States. 2030. John McDean executive produces “Vigilance,” a reality game show designed to make sure American citizens stay alert to foreign and domestic threats. Shooters are introduced into a “game environment,” and the survivors get a cash prize.

The TV audience is not the only one that’s watching though, and McDean soon finds out what it’s like to be on the other side of the camera.

The book is a satire, yet a terrifying glimpse into the possible future of America where mass shootings are a regular thing. We meet McDean, a man on the inside who is running the Vigilance. He carefully crafts and selects his Ideal Person that will be the best shooter to reach the audience they’re going for. The second main character is Delyna, a bartender whose father was a police officer killed. She hates the whole Vigilance program.