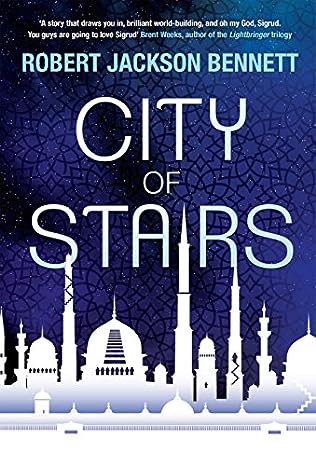 The city of Bulikov once wielded the powers of the gods to conquer the world, enslaving and brutalizing millions — until its divine protectors were killed. Now, Bulikov’s history has been censored and erased, its citizens subjugated. But the surreal landscape of the city itself, forever altered by the thousands of miracles its guardians once worked upon it, stands as a haunting reminder of its former supremacy.

Into this broken city steps Shara Thivani. Officially, the unassuming young woman is just another junior diplomat sent by Bulikov’s oppressors. Unofficially, she is one of her country’s most accomplished spies, dispatched — along with her terrifying “secretary”, Sigrud — to solve a murder.

But as Shara pursues the killer, she starts to suspect that the beings who ruled this terrible place may not be as dead as they seem and that Bulikov’s cruel reign may not yet be over.

A tale of vast conspiracies, dead gods, and buried histories, City of Stairs is at once a gripping spy novel and a stunningly original work of fantasy.