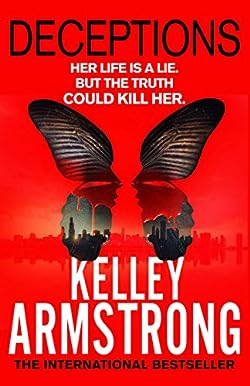 Book 3 in the Cainsville series
published 2015

The #1 New York Times bestselling author of the Otherworld series delivers her most suspenseful novel yet, where the discovery of Cainsville’s dark past and the true nature of its inhabitants leads to murder, redemption, love, and unspeakable loss.

Olivia Jones is desperate for the truth. The daughter of convicted serial killers, she has begun to suspect that her parents are innocent of their crimes. But who can she trust, in a world where betrayal and deception hide in every shadow?

Olivia Taylor Jones’s life has exploded. She’s discovered she is not only adopted, but her real parents are convicted serial killers. Fleeing the media frenzy, she took refuge in the oddly secluded town of Cainsville. She has since solved the town’s mysteries and finds herself not only the target of its secretive elders but also her stalker ex-fiancé.

Liv does have one secret weapon: a mysterious sixth sense that helps her to anticipate danger. The trouble is, this rare power comes with its own risks. There are dark forces that want to exploit Liv’s talents – and will stop at nothing to win her to their side.

Visions continue to haunt her: particularly a little blond girl in a green sundress who insists she has an important message for Olivia, one that may help her balance the light and darkness within herself. Death stalks both Olivia and the two men most important to her, as she desperately searches to understand whether ancient scripts are dictating the triangle that connects them. Will darkness prevail, or does Olivia have the power to prevent a tragic fate?

Now Liv must decide, before it’s too late. Who does she love? Who is really on her side? And can she save herself without burning down everything that matters most?