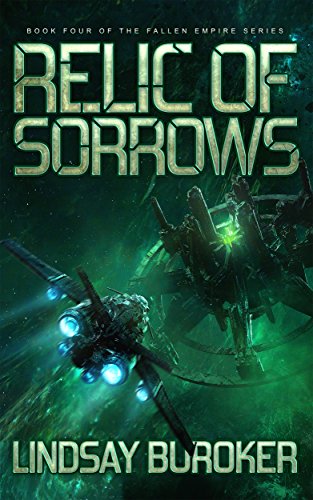 Relic of Sorrows continues the series of Fallen Empire. Once again, Alisa’s quest to find her missing daughter is delayed by the demands of her passengers, now including a Starseer she’d very much like to see the back of if he might not be the one person able to find out Jelena’s whereabouts.

Captain Alisa Marchenko finally has a lead on finding her daughter, but her passengers want her to take them on their quest instead. Even though the Star Nomad is her ship, they have power she cannot fight, and she finds herself with no choice but to accept another detour.

But the ancient relic they seek has the ability to destroy worlds and is coveted by many. The path leading to it is riddled with competitors and littered with the dead, and even a cyborg and a Starseer may not be strong enough to fight the obstacles in the way.

Swept up in a fate she never chose, Alisa must find a way to survive against impossible odds, knowing that if her passengers succeed, they will change the course of history—maybe not for the better.