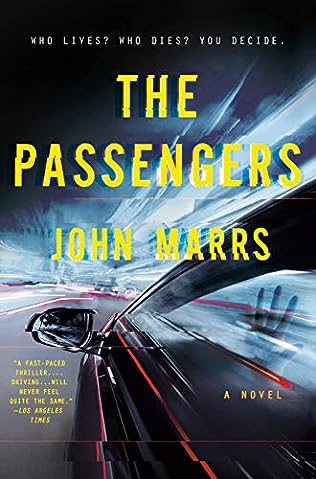 Eight self-drive cars set on a collision course. Who lives, who dies? You decide. You’re riding in your self-driving car when suddenly the doors lock, the route changes and you have lost all control. Then, a mysterious voice tells you, “You are going to die.”

When someone hacks into the systems of eight self-drive cars, their passengers are set on a fatal collision course.

Just as self-driving cars become the trusted, safer norm, eight people find themselves in this terrifying situation, including a faded TV star, a pregnant young woman, an abused wife fleeing her husband, an illegal immigrant, a husband and wife, and a suicidal man.

From cameras hidden in their cars, their panic is broadcast to millions of people around the world. But the public will show their true colors when they are asked, “Which of these people should we save?… And who should we kill first?”

The passengers are: a TV star, a pregnant young woman, a disabled war hero, an abused wife fleeing her husband, an illegal immigrant, a husband and wife – and parents of two – who are travelling in separate vehicles and a suicidal man. Now the public have to judge who should survive but are the passengers all that they first seem?