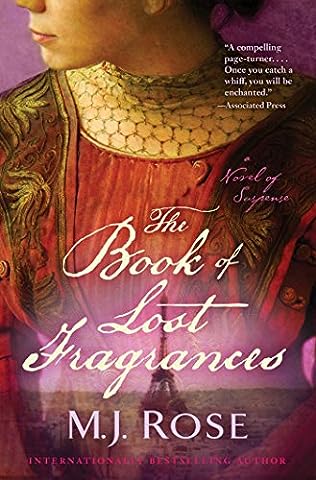 Book 4 in the Reincarnationist series (2012)

A sweeping and suspenseful tale of secrets, intrigue, and lovers separated by time, all connected through the mystical qualities of a perfume created in the days of Cleopatra—and lost for 2,000 years.

Jac L’Etoile has always been haunted by the past, her memories infused with the exotic scents that she grew up surrounded by as the heir to a storied French perfume company. In order to flee the pain of those remembrances—and of her mother’s suicide—she moves to America, leaving the company in the hands of her brother Robbie. But when Robbie hints at an earth-shattering discovery in the family archives and then suddenly goes missing—leaving a dead body in his wake—Jac is plunged into a world she thought she’d left behind.

Back in Paris to investigate her brother’s disappearance, Jac discovers a secret the House of L’Etoile has been hiding since 1799: a scent that unlocks the mysteries of reincarnation. The Book of Lost Fragrances fuses history, passion, and suspense, moving from Cleopatra’s Egypt and the terrors of revolutionary France to Tibet’s battle with China and the glamour of modern-day Paris. Jac’s quest for the ancient perfume someone is willing to kill for becomes the key to understanding her own troubled past.