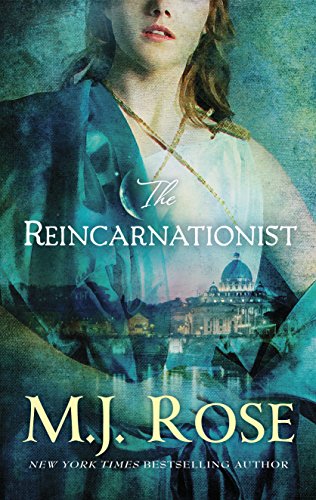 Book 1 in the Reincarnationist series (2007)

An epic thriller of secrets, history and murder that will challenge how we think about who we are, and who we were. Equal parts modern-day thriller, historical fiction, and love story, with one foot in present-day Rome and New York City, and the other in Rome some 1600 years ago.

Photojournalist Josh Ryder survives a terrorist’s bomb, only to be haunted by near-hallucinatory memories of a past life in Rome as a pagan priest whose dangerous congress with Sabina, one of the Vestal Virgins, poses a transgression so serious the lovers will face a certain death if exposed. Scents of jasmine and sandalwood and images of furtive liaisons and violence descend on Josh at will, pulling him to an ancient yet strangely familiar Roman burial chamber harboring the remains of a woman clutching a wooden box.

A trail of present-day murders takes the reader deeper into a labyrinth at whose heart lies the enigma of a collection of ancient gems, or memory stones, whose origins trace back to both ancient Egypt and India. The stones’ promise to “assist the wearer in reaching his next incarnation” sets the ancient and modern worlds on a collision course.

The question of who we are cannot be asked without first asking who we were, according to the author. Rose attempts to answer that question based on her own reincarnation research and on the writings of others, spanning thousands of years.