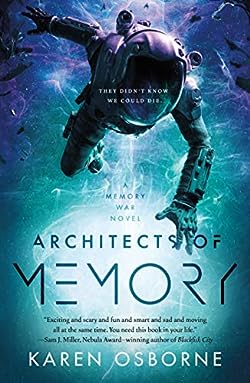 SyFY Wire SFF Reads to pick up in September

Terminally ill salvage pilot Ash Jackson lost everything in the war with the alien Vai, but she’ll be damned if she loses her future. Her plan: to buy, beg, or lie her way out of corporate indenture and find a cure. When her crew salvages a genocidal weapon from a ravaged starship above a dead colony, Ash uncovers a conspiracy of corporate intrigue and betrayal that threatens to turn her into a living weapon.

Ash has a lifetime contract and a debt to pay off. Until then she is literally enslaved by a space company. She also has a terminal illness that she has to hide, since if she is discovered, she will be thrown out (due to the risks of her job, recovering technology from ships adrift in space), and if she is thrown out, she cannot pay the debt, meaning she will never be free.