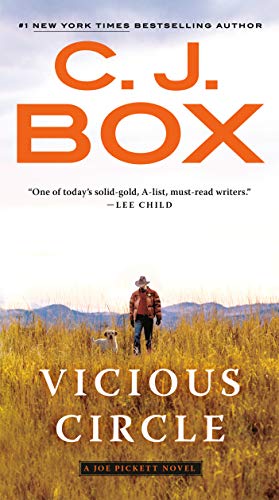 One man hell-bent on avenging his family, the other dead-set on protecting his…

Joe Pickett always knew there’d be a day of reckoning. And now that day has come.

Two years ago, his daughter was beaten and dumped by the side of a country road. Joe’s determination to avenge her forced him into a catastrophic confrontation with the Cates clan that left three of their number dead and put the two survivors behind bars. Now the youngest son, Dallas, is out of prison and back in town. Joe knows exactly why he’s returned – an eye for an eye.

The plane circled in the dark. Joe Pickett could just make out down below a figure in the snow and timber, and then three other figures closing in. There was nothing he could do about it. And Joe knew that he might be their next target.

The Cates family had always been a bad lot. Game warden Joe Pickett had been able to strike a fierce blow against them when the life of his daughter April had been endangered, but he’d always wondered if there’d be a day of reckoning. He’s not wondering any longer. Joe knows they’re coming after him and his family now. He has his friend Nate by his side, but will that be enough this time? All he can do is prepare . . . and wait for them to make the first move.