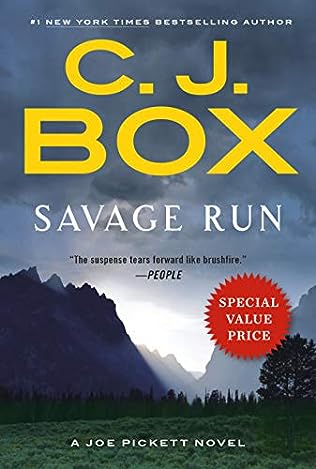 C. J. Box’s debut novel, “Open Season,” with its memorable new hero, thrilling plot, and vivid settings, hit the mystery-book world with the force of a speeding rifle bullet-and put it “on the Best of the Year track” (“Los Angeles Times”). Now C. J. Box returns with a gripping and suspenseful new novel, as dramatic and brutal as its Wyoming wilderness setting.

In Savage Run C.J. Box’s acclaimed follow-up to his career-making debut Open Season game warden Joe Pickett looks into the bizarre death of an environmental activist…and what he finds is bigger and far more sinister than anything he imagined.

When a massive blast rocks the forests of Twelve Sleep County, Wyoming game warden Joe Pickett is called to the scene to help investigate the death of a colorful environmental activist. The case is wrapped up quickly, explained as an environmental publicity stunt gone wrong, but Joe isn’t convinced. He soon discovers clues that suggest a deadly conspiracy–one that will test his courage, his survival skills, and his determination to “do the right thing” despite all costs.

A richly textured novel, “Savage Run” is an exciting confirmation of the talents of a writer hailed by Tony Hillerman as “a great storyteller.”