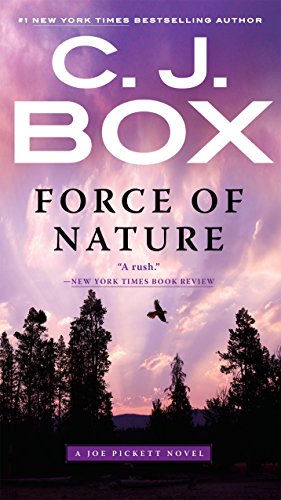 Joe Pickett’s friend’s past comes back to haunt everyone he cares about in this “violent, bloody, and quite satisfying thriller”* from #1 New York Times bestselling author C. J. Box. Game-warden Joe Pickett faces his most difficult decision yet. Outlaw falconer Nate Romanowski is in danger and Joe must make a choice: help his friend, or enforce the law?

In 1995, Nate Romanowski was in a Special Forces unit abroad when his commander, John Nemecek, did something terrible. Now the high-ranking government official and cold-blooded sociopath is determined to eliminate anyone who knows about it—like Nate, who’s hidden himself away in Wyoming’s Bighorn Mountains.

And he knows exactly how Nemecek will do it—by targeting Nate’s friends to draw him out. That includes his friend, game warden Joe Pickett, and Pickett’s entire family. The only way to fight back is outside the law. Nate knows he can do it, but he isn’t sure about his straight-arrow friend. And all their lives could depend on it.

This is the long-awaited revelation about why Nate Romanowski is hiding out in the mountains, off the grid. Which shady government agency did he belong to? Who is hunting him now?