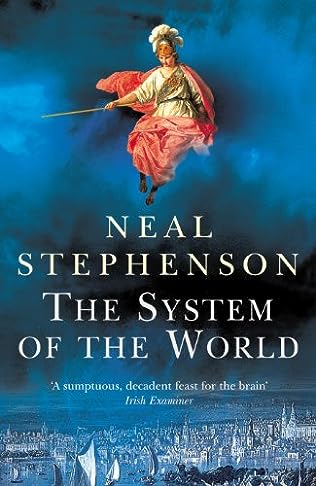 The System of the World, the third and concluding volume of Neal Stephenson’s shelf-bending Baroque Cycle (Quicksilver and The Confusion), brings the epic historical saga to its thrilling – and truly awe-inspiring – conclusion.

Set in the early 18th century and featuring a diverse cast of characters that includes alchemists, philosophers, mathematicians, spies, thieves, pirates, and royalty, The System of the World follows Daniel Waterhouse, an unassuming philosopher and confidant to some of the most brilliant minds of the age, as he returns to England to try and repair the rift between geniuses Sir Isaac Newton and Gottfried Wilhelm Leibniz.

After reluctantly leaving his family in Boston, Waterhouse arrives in England and is almost killed by a mysterious Infernal Device. Having been away from the war-decimated country for two decades, Waterhouse quickly learns that although many things have changed, there is still violent revolution simmering just beneath the surface of seemingly civilized society. With Queen Anne deathly ill and Tories and Whigs jostling for political supremacy, Waterhouse and Newton vow to figure out who is trying to kill certain scientists and decipher the riddle behind the legend of King Solomon’s gold, a mythical hoard of precious metal with miraculous properties.

Arguably one of the most ambitious — and most researched — stories ever written, Stephenson’s Baroque Cycle is set in one of the most turbulent and exciting times in human history. Filled with wild adventure, political intrigue, social upheaval, civilization-changing discoveries, cabalistic mysticism, and even a little romance, this massive saga is worth its weight in (Solomon’s) gold.