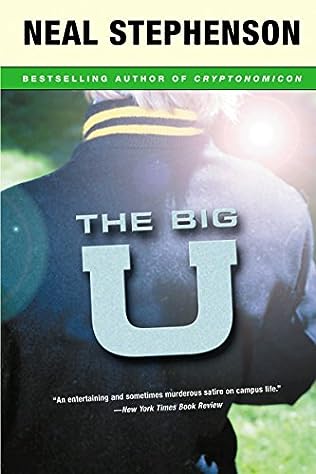 The New York Times Book Review called Neal Stephenson’s most recent novel “electrifying” and “hilarious”. but if you want to know Stephenson was doing twenty years before he wrote the epic Cryptonomicon, it’s back-to-school time. Back to The Big U, that is, a hilarious send-up of American college life starring after years out of print, The Big U is required reading for anyone interested in the early work of this singular writer.

The American Megaversity is a normal American college … just bigger. Much larger. Hundreds of thousands of students doing their daily activities are housed in the Arkolog-like building: political gatherings, demonstrations, lectures, parties … everything goes its way.

But how does it happen in this idyll that a student is bitten to death by mutant rats during a harmless play in the sewers of the university? And what about the strange men in airtight protective suits, carrying barrels of unknown content through the deepest basements of the building complex? With Big U, his first novel, published in 1984, Neal Stephenson wrote a raven-black Swift satire in which later masterpieces such as Snow Crash, Diamond Age and Cryptonomicon can already be guessed.