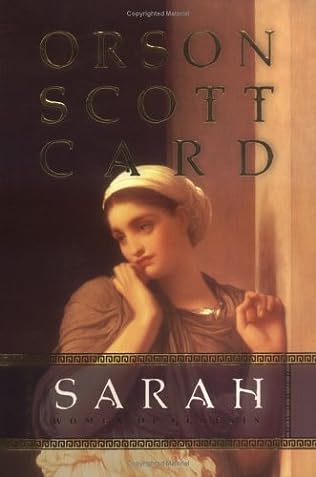 Sarai was a child of ten years, wise for her age but not yet a woman, when she first met Abram. He appeared before her in her father’s house, filthy from the desert, tired and thirsty. But as the dirt of travel was washed from his body, the sight of him filled her heart. And when Abram promises Sarai to return in ten years to take her for his wife, her fate was sealed.

Abram kept his promise, and Sarai kept hers they were wed, and so joined the royal house of Ur with the high priesthood of the Hebrews. So began a lifetime of great joy together, and greater peril: and with the blessing of their God, a great nation would be built around the core of their love.

Bestselling author Orson Scott Card uses his fertile imagination, and uncanny insight into human nature, to tell the story of a unique woman–one who is beautiful, tough, smart, and resourceful in an era when women had little power, and are scarce in the historical record. Sarah, child of the desert, wife of Abraham, takes on vivid reality as a woman desirable to kings, a devoted wife, and a faithful follower of the God of Abraham, chosen to experience an incomparable miracle.