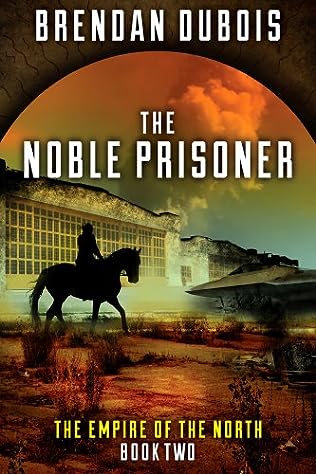 In the first book of this series, “The Noble Warrior,” young Sire Armand de la Couture traveled south with his father by airship on a trading mission to a city-state called Potomick, which was once the capitol of the world’s greatest empire, known as Amerka. There, among the ruins of buildings and museums, he came upon a sacred site, a temple of a bearded, brooding man, sitting on a throne, looking out upon a rectangular pond.

The man is known as Father Abram, and centuries ago, the stories say, he once freed the slaves. He is now worshipped and offerings are left at his feet, for the oppressed people of Potomick pray that a new Father Abram will arise and free the slaves once again. Armand soon returned to the safety and comfort of his Empire, but he then took a critical look at his Empire’s society, where indentured servants work for families to work off debts decades old, and Armand began to ask questions.

Now, in “The Noble Prisoner,” Armand has caught the attention of his Empire’s security forces. Beaten, interrogated and tortured — and also abandoned by his family — he is deported west to the Imperial Oil Sands Authority, where condemned prisoners work as slaves to extract needed oil from the ground for the benefit of the Empire. There, as a pampered prince who has never known cold, hunger and fear, Armand is forced to survive both the elements and assassins. In this stunning second work of a three-novel series, award-winning winner author Brendan DuBois sets a new world among the ashes of the old, where the humanity-long struggle between freedom and slavery takes place in the ancient lands once known as Canada and America…