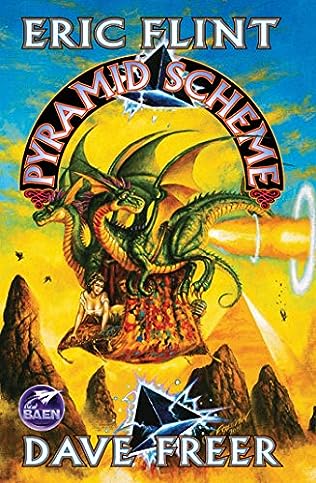 An alien pyramid has appeared on Earth, squatting in the middle of Chicago. It is growing, destroying the city as it does — and nothing seems able to stop it, not even the might of the US military. Somehow, the alien device is snatching people and — for unknown reasons — transporting them into worlds of mythology. Dr Lukacs is one of the victims.

Granted, he’s an expert on mythology. But myths are not something he’d thought to encounter personally. Or wanted to! Sure, he has a couple of tough paratroopers along with him, as well as a blonde Amazon biologist and a very capable maintenance mechanic. Unfortunately, modern weapons don’t work, and the Greek gods are out to kill the heroes.

Well, yes, they’ve got Medea and Arachne and the Sphinx on their side (both Sphinxes, actually — the Greek version as well as the Egyptian). And at least some of the Egyptian gods seem friendly.

But that can be a very mixed blessing, to say the least. Oh, and whatever you do—don’t mention dwarf-tossing.