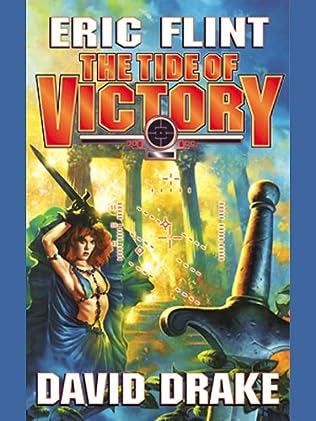 The creators of the monster called Link once were human, but that was distant ages in their past. Now, from the far future, they have sent their creation back to shape the world of the 6th century AD into the form that will make their own foul existence possible.

Taught and ruled by Link, the Malwa Empire has spread from the Indus Valley, across India and into Mesopotamia. Its inhuman master has chosen its instruments from the most brutal and degraded members of humanity, and they have served its monstrous ends well.

Those in the future who never were human have sent their own messenger to the past: Aide, a gleaming jewel who can warn but not lead; who can teach the construction of new weapons but cannot wield those weapons himself.

Aide has come to Belisarius, the greatest general of the 6th century and perhaps any century. Between them they have forged an alliance of all the world against evil—and an army that can be the spear through evil’s heart.

With lancers and breech-loading rifles, with steamships and with galleys, Belisarius is marching into the Malwa heartland. In a world aflame with treachery, assassination, and slaughter beyond anything save the battles of mythology, he and his companions know only one sure thing: if they fail, their whole world is doomed to living Hell—for all time!

Politics, battle, and heroic adventure in a vivid alternate past!