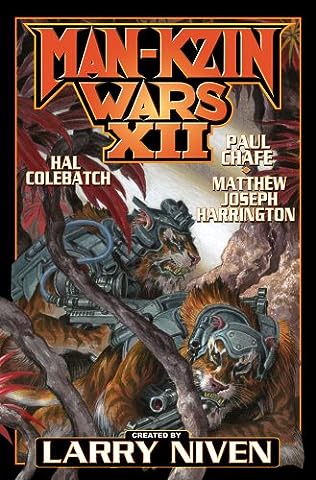 New weapons, new strategies and new leaders – the Kzin are on the march and the humans had better watch out. Once again, it’s howling time in Known Space. Kzin and Human Clash Again in this All-New Report from the Frontlines of the Top Selling Space War in Science Fiction.

The kzin, formerly invincible conquerors of all they encountered, had a hard time dealing with their ignominious defeat by the leaf-eating humans. Some secretly hatched schemes for a rematch, others concentrated on gathering power within the kzin hierarchy, and some shamefully cooperated with the contemptible humans, though often for hidden motives.

In war and in uneasy peace, kzin and humans continue their adventures, as told by Hal Colebatch, Paul Chafe, and Michael Joseph Harrington, expanding on the concepts created by New York Times best-selling writer Larry Niven.