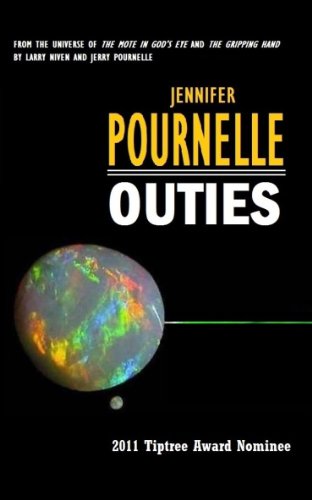 In a return to the CoDominium universe of the Second Empire of Man, Outies pauses at the fringes of human space, on an outworld that never knew fossil fuels. New Utah instead pushed crude solar technologies to the limits of everyday utility.

But a planet is a big place – and it’s time for the New Utahns to meet the neighbors. Blending hard science and social science, Outiesexplores complexities of biology, geology, and ecology at the heart of alien Motie society and evolution. While military science fiction in a sense, that sense is very much of the wars of our time. Outies plunges through the confusion, chaos, factionalism, and unpredictability of low intensity conflict with realism, but largely through civilian eyes.

In a twist on traditional space opera, it introduces Asach Quinn – a wily, thoughtful, genderless, and diplomatic foil to reckless pilot Kevin Renner. Leaving the aristocratic manors of Sparta, Quinn burrows deep inside the heads of members of the Church of Him – who believe that the red dwarf visible twinkling through the Coal Sack Nebula is literally the Eye of God.