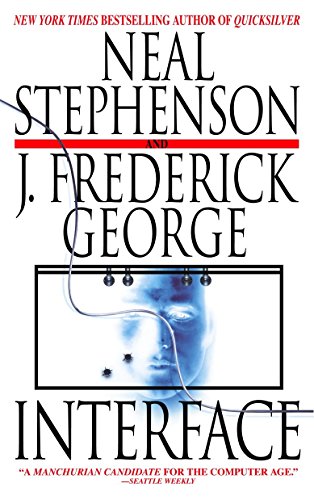 From his triumphant debut with Snow Crash to the stunning success of his latest novel, Quicksilver, Neal Stephenson has quickly become the voice of a generation. In this now-classic thriller, he and fellow author J. Frederick George tell a shocking tale with an all-too plausible premise.

There’s no way William A. Cozzano can lose the upcoming presidential election. He’s a likable midwestern governor with one insidious advantage – an advantage provided by a shadowy group of backers. A biochip implanted in his head hardwires him to a computerized polling system. The mood of the electorate is channeled directly into his brain. Forget issues. Forget policy. Cozzano is more than the perfect candidate. He’s a special effect.

Governor Cozzano suffers a stroke shortly before the long road of the primaries for the new US presidential election begins. As part of the treatment, we propose the implantation in the brain of a novel biochip with which, in addition, it will be connected to a sophisticated electoral polling system. In this way he has access to information about the reactions, wishes and feelings of the electors, which are communicated directly to the brain, and inevitably becomes the perfect candidate.
Given this sophisticated and powerful development of technology, what will happen to democracy? Can politics be free in the new era of ubiquitous information technologies and neurosciences?