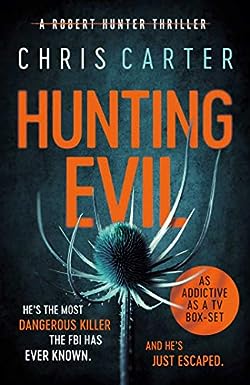 The compulsive new novel from the author of the Sunday Times Number One bestseller The Caller and Gallery of the Dead.
AS ADDICTIVE AS A TV BOXSET!

Detective Robert Hunter finds after three years that his arch-nemesis and former best friend, Lucien Folter, has escaped from prison. Lucien isn’t just any prisoner, he’s a genius serial killer, and a master of disguise. And he’s coming for Hunter…

The cruelest killer the FBI has ever hunted.
In life custody.
But he escaped.
His name: Lucien torture.
Robert Hunter will not rest until he has caught him again.

‘Every story one day comes to an end.’
As roommates, they met for the first time in college. Two of the brightest minds ever to graduate from Stamford Psychology University.
As adversaries, they met again in Quantico, Virginia. Robert Hunter had become the head of the LAPD’s Ultra Violent Crimes Unit. Lucien Folter had become the most prolific and dangerous serial killer the FBI had ever encountered.

Now, after spending three and a half years locked in solitary confinement, Lucien has finally managed to break free. And he’s angry.

For the past three and a half years, Lucien has thought of nothing else but vengeance.
The person responsible for locking him away has to pay, he has to suffer.
That person … is Robert Hunter.
And now it is finally time to execute the plan.