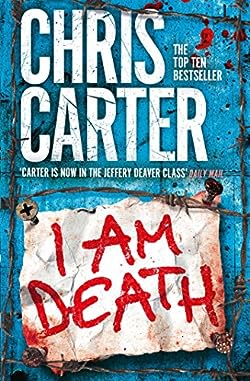 AN EVIL MIND was Chris Carters’s most acclaimed novel to date, described by the Daily mail as: ‘A chilling, compulsive portrait of a psychopath, and proves that Carter is now in the Jeffrey Deaver class.’ It spent three weeks in the Sunday Timestop ten and received brillant reviews and sales.

This terrifying new standalone thriller reunites Hunter and Garcia in their most explosive case to date.

Seven days after being abducted, the body of a twenty-year-old woman is found on a green patch by the Los Angeles International Airport. She has been left with her limbs stretched out and spread apart, placing her in a five-point human star.

The autopsy reveals that she has been tortured and murdered in a most bizarre way. But the surprises don’t end there. The killer likes to play, and he left something behind for the cops to find.

Detective Robert Hunter, who leads the LAPD’s Special Section, Ultra Violent Unit, is assigned to the case. But almost immediately a second body turns up.

Surrounded by new challenges as every day passes, Detective Hunter finds himself chasing a monster. A predator whose past hides a terrible secrete, whose desire to hurt people and thirst for murder can never be quenched – for he is DEATH