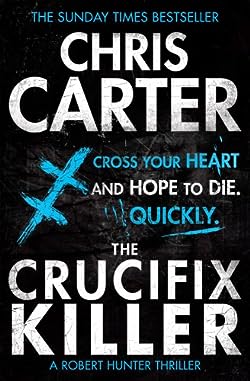 He knows no mercy. He cruelly kills. And he’s devilishly intelligent. Los Angeles: The body of a beautiful woman is found, tortured to death and brutally mutilated. No traces. Except for a cross scratched on the back of the neck, a devil’s mark: the identification mark of an executed serial killer. Detective and profiler Robert Hunter quickly realizes that the crucifix killer is alive. He continues to kill in a spectacular way. And he’s always one step ahead of Hunter – because he knows him well. Too good.

When the body of a young woman is discovered in a derelict cottage in the middle of Los Angeles National Forest, Homicide Detective Robert Hunter finds himself entering a horrific and recurring nightmare. Naked, strung from two parallel wooden posts, the victim was sadistically tortured before meeting an excruciatingly painful death.

All the skin has been ripped from her face – while she was still alive. On the nape of her neck has been carved a strange double-cross: the signature of a psychopath known as the Crucifix Killer. But that’s impossible. Because two years ago, the Crucifix Killer was caught and executed. Could this therefore be a copycat killer? Or could the unthinkable be true?

Is the real killer still out there, ready to embark once again on a vicious and violent killing spree, selecting his victims seemingly at random, taunting Robert Hunter with his inability to catch him? Hunter and his rookie partner are about to enter a nightmare beyond imagining.