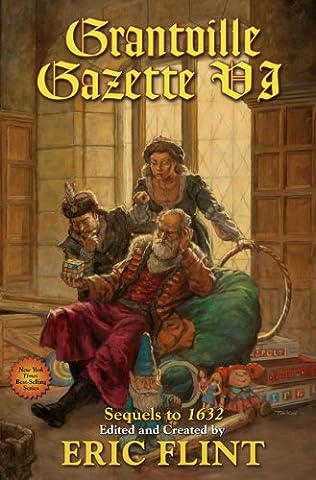 A cosmic accident sets the modern West Virginia town of Grantville down in war-torn seventeenth century Europe. It will take all the gumption of the resourceful, freedom-loving up-timers to find a way to flourish in mad and bloody end of medieval times. Are they up for it? You bet they are.

Edited by Eric Flint, and inspired by his now-legendary 1632, this is the fun stuff that fills in the pieces of the Ring of Fire political, social and cultural puzzle as supporting characters we meet in the novels get their own lives, loves and life-changing stories. The future and democracy have arrived with a bang.

Stories include:
* A Taste of Home by Chris Racciato
* Federico and Ginger by Iver P. Cooper
* Recycling by Philip Schillawski and John Rigby
* Old Folks’ Music by Gorg Huff and Paula Goodlett
* Mightier than the Sword by Jay Robison
* Grantville is Different by Russ Rittgers
* The Woman Shall Not Wear That by Virginia DeMarce
* Live Free by Karen Bergstralh
* The Dalai Lama’s Electric Buddha by Victor Klimov
* The Doctor Gribbleflotz Chronicles, Part 1: Calling Dr. Phil by Kerryn Offord
* Dr. Phil’s Amazing Lightning Crystal by Kerryn Offord
* Dr. Phil’s Aeolian Transformers by Kerryn Offord and Rick Boatright
* Exegesis and Interpretation of Up-timer Printed Matter by Francis Turner
* Bouncing Back: Bringing Rubber to Grantville by Iver P. Cooper
* On the Design, Construction and Maintenance of Wooden Aircraft by Jerry Hollombe
* The Jews of 1632 by Douglas W. Jones