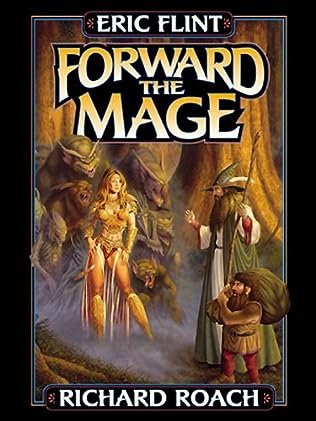 The youthful artist-swordsman Benvenuti Sfondrati-Piccolomini arrived in the city of Goimr just in time for disaster to strike. The evil sorcerer Zulkeh had driven the King of the realm insane, then fled from the city!

So much for Benvenuti’s plans to become the Royal Artist …

Injury was added to insult when Benvenuti was immediately arrested by the Secret Police. Then, after barely managing to escape the clutches of the authorities, he found himself embroiled with a revolutionary agitator and a gigantic madman.

Things were not as they seemed. The wizard Zulkeh and his apprentice Shelyid were, in fact, guiltless. Zulkeh had been summoned to interpret the King of Goimr’s mysterious dream, which the sorcerer came to realize foretold an impending catastrophe for civilization. Zulkeh and Shelyid had actually left Goimr to discover the really important implications of the dream, beyond the trifle of the dynasty’s destruction.

Much to the artist’s dismay, his adventures and those of the sorcerer were hopelessly intertwined. Soon, Benvenuti and his two companions were off in pursuit of Zulkeh, trying to save the entire sub-continent of Grotum from conquest by the Ozarean Empire. Benvenuti was swept up in a whirlwind of revolutionary plotting and perilous wizardry as he traveled across the vast sub-continent. The only certainty was that he was on a quest the end of which he could not possibly fathom, accompanying a female revolutionary whose beauty was only outdone by her ferocity.

It didn’t help that he’d fallen in love with her, especially since her brother’s help would be vital to the success of their enterprise. Gwendolyn’s brother Greyboar was the world’s greatest professional strangler. And they didn’t call him the Thumbs of Eternity for nothing …