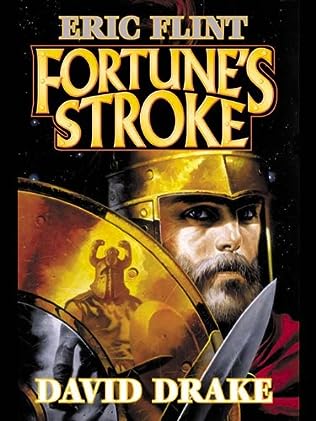 Aide, a human soul embodied in a jewel, journeys back in time to join forces with Belisarius, the greatest general of the sixth century, to stop Link, an evil supercomputer that is using its vast powers to rewrite history to create the powerful, technologically advance Malwa Empire.

Getting to follow big, bad Byzantine Belisarius around the alt-history battlefield–courtesy of Eric Flint and David Drake–comes in a close second to having your own personal unit of cataphracts. (Although, of course, those cataphracts would be nice to have in traffic.) Following on the heels of Destiny’s Shield, the fourth installment in this popular series follows the superhuman general as he harries Malwa troops in the mountains leading into Mesopotamia.

He’s still got the across-time assistance of the crystal Aide to help him deal with the threat, augmenting his senses and keeping him briefed on the tactics of everyone from Wellington to Turenne. But Link, the Supreme Commander of the Universe, still calls the shots for the evil empire, and Belisarius has to double-time to keep up (especially facing such shrewd field commanders as Damodara).

Fortune’s Stroke downshifts the series a notch in terms of sheer Belisarius-meted carnage because Damodara’s Ye-tai barbarians and Rajput cavalry aren’t the only show in town. Flint and Drake spend a good deal of time with other characters in the series in other locales, like Kungas and Irene in south India and Antonina in Axum (for a start). But this investment will surely pay off as the series continues, as Belisarius and his cohort close in on the Malwa for good.